Uncertainty stemming from the spread of the coronavirus (COVID-19) drove interest rates to a record low as equities traders sought the safety of the bond market. Despite recent volatility, the economy remains well positioned to withstand the current headwinds. The long-term and slower moving nature of real estate makes the sector an attractive investment option, particularly in the current uncertain climate.

Fed remains accommodative. In an effort to lengthen the economic runway, the Federal Reserve on Oct. 30 cut the overnight rate by 25 basis points for the third time in 100 days. Domestic growth has been moderating this year, falling to 1.9 percent in the third quarter as the trade war with China curtailed exports and ebbed inventory investment. With tariffs on Chinese goods increasingly coming into play, the economy could face additional pressure, but the Fed has signaled that another rate cut in December will be dependent on incoming data. Several Fed members have argued against additional cuts, as both inflation and unemployment remain very low. A decision on rate policy will largely be determined by the holiday retail season and ongoing trade talks. Should a resolution to the trade war be achieved, the economy and interest rates will likely witness an upward bounce. The Fed’s commitment to short-term Treasury purchases remains another key factor, increasing liquidity in the overnight markets and reducing short-term interest rates. This has helped “uninvert” the yield curve as the three-month Treasury rate fell below the 10-year reading. Though this has reduced recession risk, many speculate that a recession could still be on the horizon.

PREPARE FOR THE FUTURE WITH A PROACTIVE STRATEGY
AND THE INDUSTRY’S LARGEST, MOST DIVERSE INVENTORY

Brief yield-curve inversion sparks volatility. The short-lived inversion of the 10-year and two-year Treasury yield curve sparked significant financial market volatility as the closely monitored sign of an impending recession delivered a warning alert. Despite efforts by the Federal Reserve and generally strong economic metrics, including steady job creation, low inflation, above-average retail sales growth and elevated small-business confidence, financial markets remain concerned about ongoing trade disputes with China. The flight to safety sparked by the uncertainty has pushed the 10-year Treasury rate to the 1.5 percent range, within 20 basis points of the record low set in July 2016. The convergence of these factors has delivered a unique window of opportunity for commercial real estate investors.

Vacancy Moves Back Down Amid Curtailing Development and Positive Demographic Trends

Interest rates fall as Fed shifts policy outlook. At its latest meeting, the Federal Reserve signaled an end to rate hikes this year, while reserving the potential for one increase in 2020. 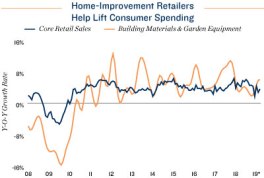